In Part 1 we saw how Rackheath had been developed, and how the 467th BG, the resident group had been subjected to a fierce introduction to the war.

Now, in part 2, we continue our visit to Rackheath and the bizarre event of December 1944.

On December 24th,  B-24 #42-50675 “Bold Venture III” piloted by 1st. Lt. P. Ehrlich, was one of sixty-two B-24s from the 467th taking part in a maximum effort attack on a range of targets in Germany. Hit by flak over the target, five of the  crew, including the pilot, bailed out fearing the aircraft was lost. All five were subsequently captured and incarcerated as prisoners of war. The fires in the engines then extinguished themselves allowing the remaining crew to engage the auto-pilot, taking the aircraft homeward and over allied territory. Once over France, they too bailed out as they were unable to land the heavy bomber, each of these men being safely picked up by allied forces. The plane then continued on, unmanned across the Channel, until it ran out of fuel. 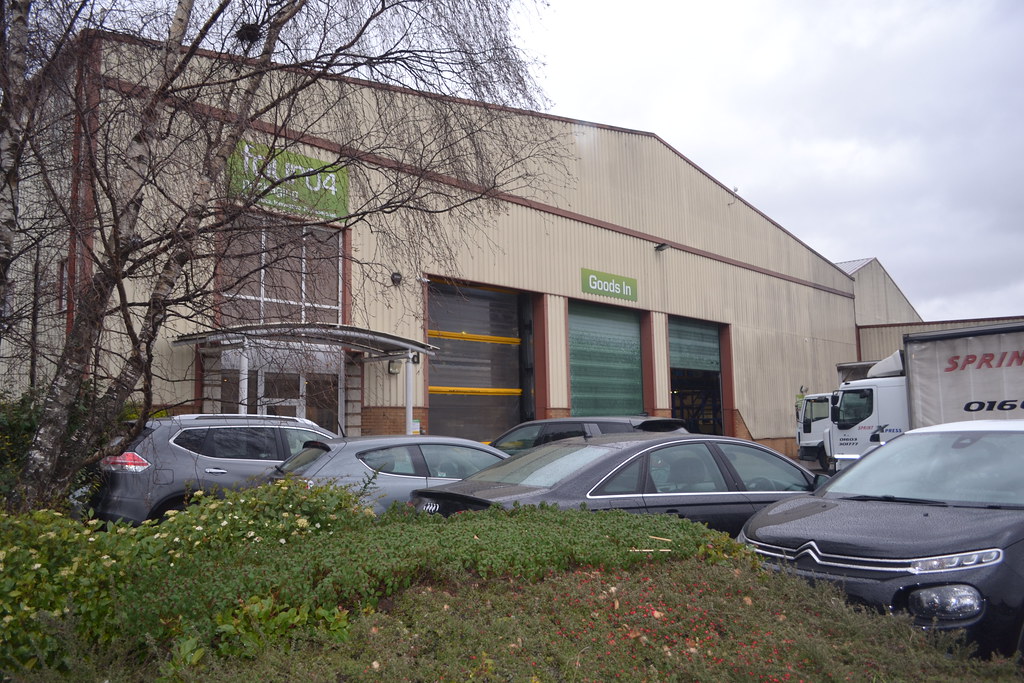 The former hangar has been completely refurbished.

At this point, the story becomes confused. Some say it landed / crashed  in a field near to  Lower House Farm, Vowchurch Common in Herefordshire. The wreck being salvaged the following day. However, there is little evidence of this event, and other sources (Freeman “The Mighty Eighth“) have it landing in a Welsh marsh a little further west. Whatever the truth is, its a remarkable, but not unique, story of  a crewless bomber flying ‘home’ coming to rest safely on British soil.

On the 29th the continuing appalling weather caused the loss of two more B-24s, both crashing attempting to take off from a foggy Rackheath (#42- 95115 and #42-51572). A third (#42-94881) was then abandoned over the sea, and a forth (#44- 10607) crashed at Attlebridge also after sustaining damage on its take off. The  visibility was so poor that day that the crews couldn’t even make out the edge of the runway. As a result of these crashes, the mission to Prum, was finally scrubbed, but by then fifteen airmen had already been lost.

The dawn of 1945 saw the Ardennes offensive continuing, and at Rackheath B-24 ‘Witchcraft‘ was approaching its 100th Mission an achievement it made on January 14th 1945. In just 140 days since arriving, it had reached its 70th mission an average of one mission every two days, but what made this particular achievement so remarkable was not this incredible average, but the fact that the aircraft had been mechanically sound throughout, not having to turn back from any sortie it had undertaken. A remarkable achievement, and a solid testament to the dedication of the ground crews who kept her in the air.

“The Witch“, as she affectionately became known, would go on to complete a total of 130 missions without a single abort nor injury to any crewman. She became one of the most celebrated aircraft in the 8th Air force’s history. This total would surpass all other B-24s in the whole of the European theatre of operations. Like many though, ‘The Witch‘ eventually returned to the US where she was unceremoniously taken apart at Altus, Oklahoma. In memory of the aircraft, her achievements and the crews who were lost flying B-24s, she is now represented by the world’s last flying Liberator, currently owned and operated by the Collings Foundation, Massachusetts.

As 1945 progressed the end of the war was near. Attempts by the Luftwaffe to curtail bomber intrusions into German airspace were becoming desperate. The introduction of the Me 262 was too little, too late, to make a major difference. But so determined to stop the bombers were the Luftwaffe pilots that many still got through and they were finding the bombers.

Other fighters more determined to bring down the enemy began ramming them. A specialist squadron the ‘Sonderkommando Elbe‘  was set up using volunteer pilots. They were instructed to strike the fuselage of the bomber between the wing and tail thus cutting the aircraft in two, a tactic that would  allow the German pilot to bail out of his aircraft whilst taking down the bomber.

On April 7th, the unit was put into action in its one and only recorded attack, as over 1,000 heavies flew towards German airfields, oil storage facilities and factories in north-west Germany. From the 2nd AD, 340 B-24s headed for Krummel, Duneburg and Neumunster. As the force approached they were targeted by a mix of over 100 Luftwaffe fighters including 109s, 190s and 262s. In this mix was the Sonderkommando Elbe. Whilst the tactic would prove to be more devastating to the rammer than the target, one of Rackheath’s B-24s #42-94931 ‘Sack Time‘ was hit in the tail severing the starboard stabiliser. The B-24’s pilot, Lt. Robert Winger, managed to keep the aircraft flying but with little control, he ordered the crew to abandon the aircraft once over allied territory. The B-24 then crewless, fell from the sky.

It is not known whether the attack was a deliberate act by the Sonderkommando Elbe, or as a result of the tail gunner Robert (Bob) Perkins’s action. Perkins in his attempt to defend the B-24, fired desperately at the attacker, Heinrich Henkel, striking the aircraft several times.

Then for three days in mid April, the heavies of the USAAF turned their attention to the gun batteries around Royan. These German strong holds were hindering the allied plans to use the port at Bordeaux, they had to be ousted.

During one of the missions, on April 15th, the 467th would make history again when three of the four squadrons released all their 2,000lb bombs within 1,000 ft of the mean point of impact, half of these being within 500 ft – a record that would not be beaten by any other USAAF unit. This was the ‘icing on the cake’ for the 467th who were building a strong reputation for consistent and accurate bombing.  So determined were the Americans to remove the defenders on the ground, that they used Napalm in 500 lb tanks, a rather horrific weapon used to great effect during the Vietnam war.

By the end of April the war was all but over, and at bases all around the UK, air and ground crews eagerly awaited the notice to cease operations. Some units were already being stood down, and very soon operations would begin to drop food rather than bombs. As the end of hostilities was announced, the figures began to be totted up. The 379th BG at Kimbolton were recorded as dropping the greatest number of bombs on a target, with the 467th BG at Rackheath achieving the greatest accuracy. This Rackheath record was due, in part, to the dedication, support and drive of its Commander, Colonel Albert Shower. 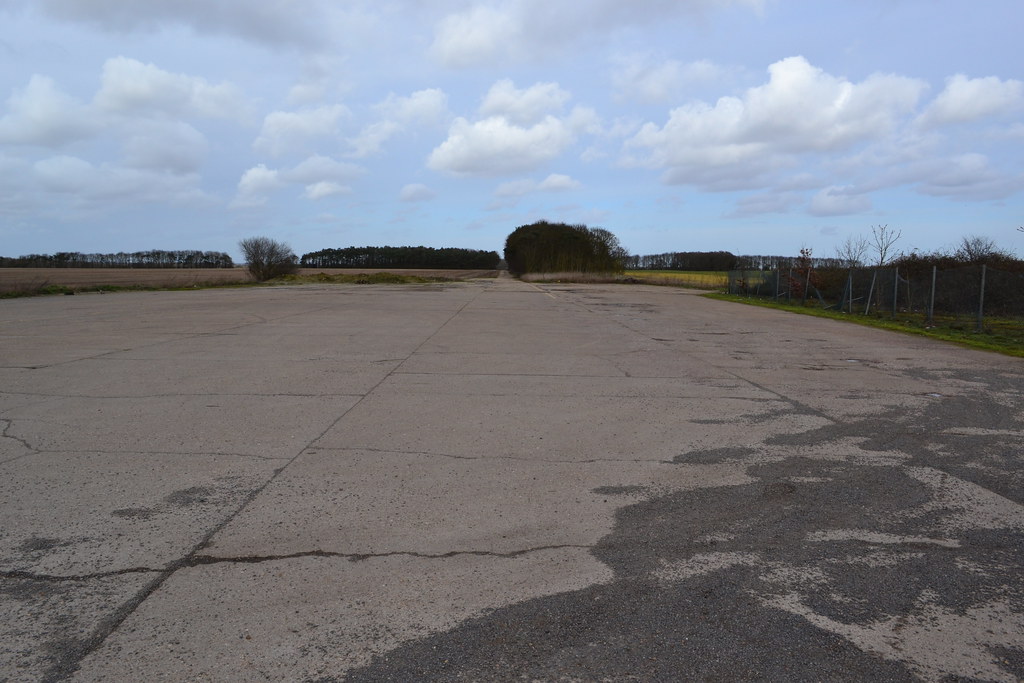 On May 13th, the 467th were to lead the Victory Flypast over High Wycombe, the headquarters of the Eighth Air Force operations, the choice of a B-24 as lead fuelling the ‘ill-feeling’ between B-24 and B-17 crews even further.

Over the next month, the aircraft and men of the 467th would return to the US, the majority of aircraft departing Rackheath on June 12th, whilst the ground echelons left via the Queen Mary from Greenock, the same port they had arrived at just over a year earlier. Eventually the 467th would be disbanded, renamed the 301st, but for Rackheath it was the end, and within a year much of the airfield was already being ripped up, the runways were disappearing and many of the accommodation buildings had been torn down. The entire site measuring just short of 4 km2  was already beginning to disappear.

Gradually agriculture has taken over, much of the main airfield site are now fields. The technical area has since been developed into an industrial estate with many of the original buildings being re clad, redeveloped, modernised or pulled down. The watch office has thankfully been refurbished and from the outside resembles a watch office typical of the time. Inside it is now offices. The one surviving T2 hangar, has had brickwork added to it, other buildings are almost indistinguishable from their modern counterparts. A memorial, dedicated to the men and Women of the 467th was unveiled on 29th July 1990, by the then 80 year old Colonel Albert J. Shower, returning for one last time to the place he had built up a reputation for hard graft whilst appreciating the need for recreation.

If approaching from the south, take the A1270 from Norwich heading north, leave at the roundabout with Salhouse Road turning right. The Holy Trinity Church is a few hundred yards along this road. Here you will find the village sign, memorial benches and numerous plaques in memory of the 467th. The two wrought iron gates at the entrance of the church were donated by the Coffey crew. Inside here (the church was closed on my visit) a collection of photographs and letters bring the Rackheath to life once more. 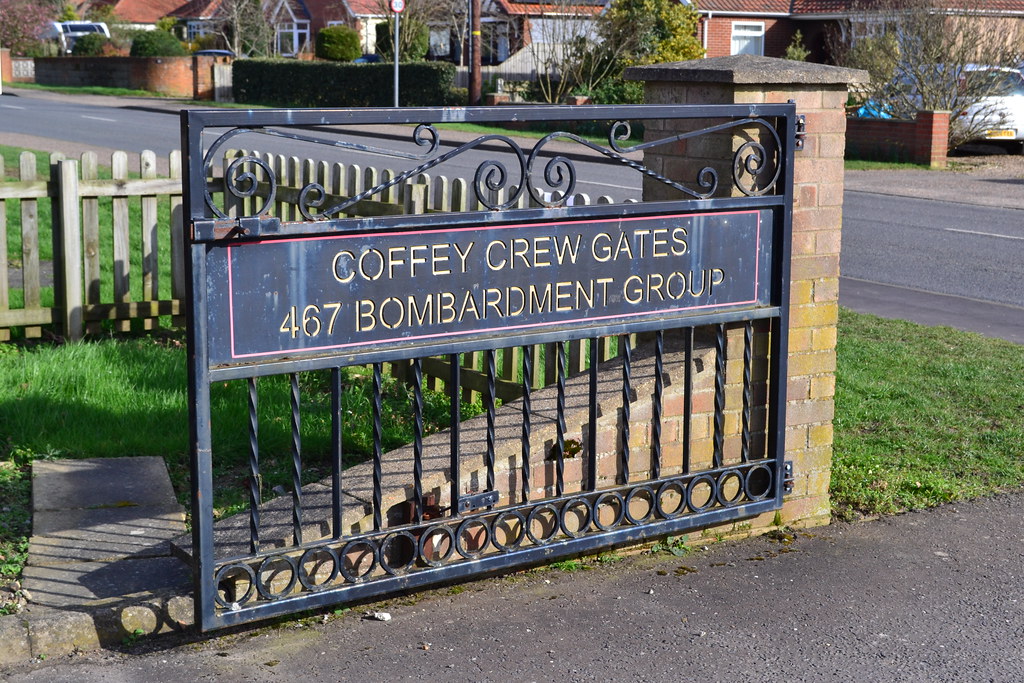 The memorial gates donated by the Coffey crew.

When leaving the church, go back but turn right along Green Lane West. This takes you past the remaining hardstands and along to the industrial estate. Enter by Wendover Road, named after Wendover Field in Utah. Turning into Bidwell Road, (following the signs) you will find the main memorial on the the corner of Bidwell Road and Liberator Close.

Coming back again, turn left, follow Wendover Road to the corner with Witchcraft Way, a small road to your left. Here you will see the Watch Office. Also along here are Ramirez Road, Albert Shower Road, the T2 and other buildings of interest. A real rabbit warren, it is best explored to really discover the many buildings and plaques that remain.

The main accommodation areas were located back across the from the entrance of Wendover Road. Today a new road has been cut through this wooded area but within these woods, remains of huts still exist, some with etchings on the walls. All on private land, they are also gradually disappearing from view.

Rackheath was a short lived base, operating for just a short part of the war. But its contribution and the contribution of its crews, was nonetheless immense. With high accuracy and the determination to win, they took the war into the heart of Germany itself. The names of these young men now live on, in the road names and plaques that adorn many of the building and streets around this beautiful and now peaceful area of Norfolk.

After departing Rackheath we head a few miles east, toward the coast. Not far away, is another airfield, this time a former RAF site. Long gone it continues to use part of the original runway, two watch offices remain, and a smattering of wartime buildings lay dormant in the corner of now agricultural fields. In part 2 of Trail 58 we visit RAF Ludham.