On 12th February 1942, 18 young men took off on a daring mission from RAF Manston, in outdated and out gunned biplanes, to attack the German fleet sailing through the English Channel.

Leaving Brest harbour, a force of mighty ships including the Scharnhorst, Gneisenau and Prinz Eugen, attempted a break out, supported by sixty-six surface vessels and 250 aircraft, they were to head north through the Channel out into the North Sea and homeward to Germany where they could receive valuable repairs.

For many weeks the British had been monitoring the vessels awaiting some movement out to sea. Then,  German transmitting stations based at both Calais and Cherbourg, began a cat and mouse game transmitting false readings to interfere with British radar sets on the south coast. In mid February, the Luftwaffe organised themselves over northern France and the radars went wild with false readings and interference. Temporarily blinded by these measures, the British were unable to ‘see’ the mighty armada slip out into the Channel waters. Their escape had been a success.

The British, fearing such an attempt, had prepared six Fairy Swordfish of 825 Naval Air Squadron at nearby RAF Manston in readiness for the breakout. Ageing biplanes, they were no match for the Luftwaffe’s fast and more dominant fighters, nor the defensive guns of the mighty German fleet they were hoping to attack.

In the cold winter of 1942, the Swordfish were kept ready, engines warmed and torpedoes armed, when suddenly and unexpectedly, at 12:25 on the 12th February, the fleet was sighted. They could no longer wait, and instead of attacking as planned at night, they would have to attack during the day, and so the order was given. The crews started their engines and set off on their daring and suicidal mission.

Shortly after take off, the escort arrived, merely ten Spitfires from No. 72 Squadron RAF, led by Squadron Leader Brian Kingcombe, and not the five Spitfire squadrons promised. The six Swordfish, led by  Lt. Cdr. Eugene Esmonde, dived to 50 feet and began their attack. Hoping to fly below the level of the anti-aircraft guns each of the six Swordfish flew gallantly toward their targets. Eventually hit and badly damaged, they pressed home their attacks, but they were out-gunned, and out performed, and just twenty minutes after the attack began, all six had fallen victim to the German guns. No torpedoes had struck home.

Of the eighteen men who took off that day, only five were to survive.

Leading the attack, Lt. Cdr. Esmonde was warded the V.C. Posthumously, he had previously been awarded the Distinguished Service Order for his part in the attack on the Battleship Bismark; an award that also went to: S/Lt. B Rose, S/Lt. E Lee, S/Lt. C Kingsmill, and S/Lt. R Samples. Flying with them, L/A. D. Bunce was awarded the Conspicuous Gallantry Medal and twelve of the airmen were mentioned in dispatches.

In their honour and to commemorate the brave attempt to hit the German fleet that day, a memorial was erected in Ramsgate Harbour, the names of the eighteen men are listed where their story is inscribed for eternity. 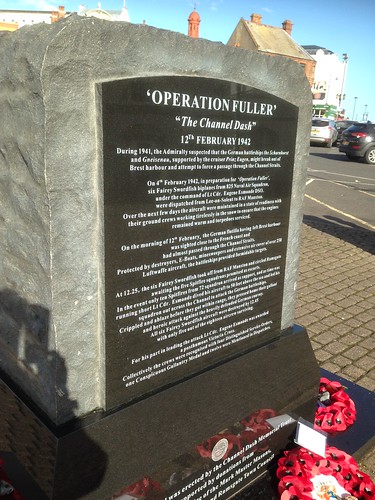 The memorial stands in Ramsgate Harbour. 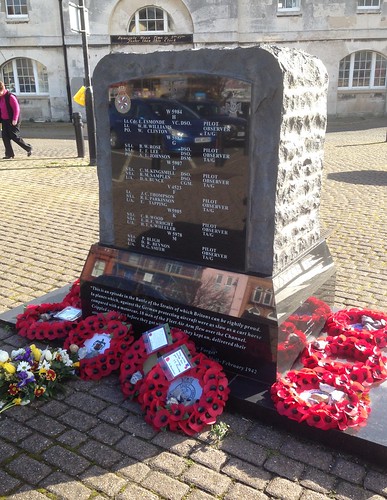 The names of the 18 airmen and the Swordfish they flew.